We had a very nice lunch in Cardiff Bay this week. The restaurant is called Demiro’s. It’s located in the Mermaid Quay complex just across the Oval Basin from the Millennium Centre. We normally grab lunch in Coffee Mania but decided to try somewhere new. I’m normally put off by the bigger restaurants in Cardiff Bay for lunch because of the price, but now most of them do cheaper lunchtime express menus. They’re obviously aimed at the office workers who work in the nearby Welsh Assembly and Atradius.

The food is a mixture of styles based around Mediterranean. We had a good sized meal each and drinks for £15 for two. Service was good without being too attentive. We visited the British Drift Championships at Llandow Circuit yesterday. I was surprised to see that one of the top drivers is Shane Lynch of Boyzone fame. The photo shows Shane drifting around the first bend. Nice car! It’s a Skyline R33 GTS-T. The photo was taken by Kee. Have a look at his Flickr photos, there are some other good shots of some of the other cars there.

Quite an interesting review of the Fairy Hill Hotel and Restaurant near Reynoldston on the Gower from late last year.

It’s a couple of years since we last had a meal there and we thought the same, good but not mind-blowing. The restaurant has a huge reputation and I guess that it’s always hard to live up to expectations.

The Foxhunter sounds like it’s worth a visit though.

We found that the beach at nearby Port Eynon is a good place to walk off your meal afterwards!

Interestingly there’s been some debate on Twitter recently about this. There was about an even split between whether it should be south Wales, or South Wales. It would appear that to some people using a capital S raises the profile of South Wales as a region, and hence diminishes Wales as a country. I can see the argument, but to me it still doesn’t mean that South Wales doesn’t exist as a recognisable area. Given that the whole purpose of this website is focused on South Wales as an area, then on here I’m sticking with a capital S 🙂

As someone who comes from South Wales and has a few web-sites about South Wales it seems really strange why the BBC always refers to the area as “south Wales” – without the “s” capitalised.

For an example look at this article. This is obviously a set policy for South Wales because they do it consistently and seem to have done so for a number of years.

However, the policy doesn’t seem consistent with other areas – for example they don’t refer to the “north east” of England but the “North East“.

For me and most people who live here this is a strange thing to do – South Wales is a clear, distinct regional area. Yes we do live in the geographic south of Wales but we also live in South Wales! 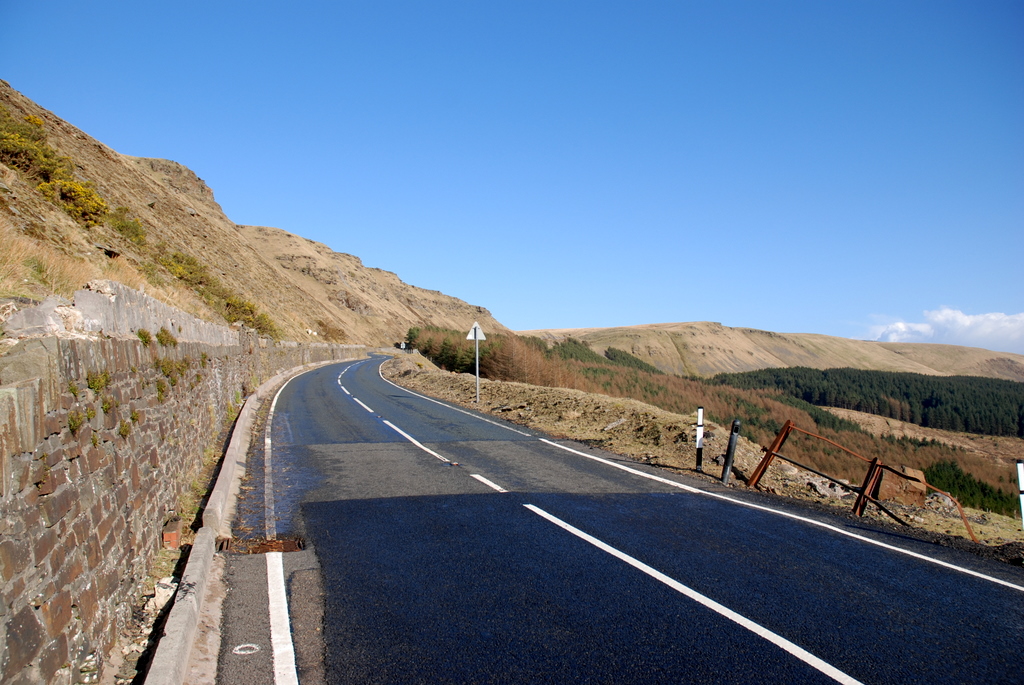 The Bwlch is a 1600ft mountain just north of Nantymoel north of Bridgend. It’s quite a climb up even by car but the views are well worth it. This photo show the final climb up as the road zig-zags from Nantymoel. From the top you have great views down into Treorchy in the Rhondda valley. The top of the mountain is popular with model plane soarers.

Well worth a visit by car or even by foot if you’re feeling brave! This has to be one of my favourite shots of Cardiff Bay. I took it in October 2007 at about 9 in the morning. The Bay is amazingly smooth and the reflections are great. The St David’s Hotel is in the background.

The wooden structures in the foreground are called dolphins and were used to moor ships against when the bay was a full operating port. The Bay is a great place especially when you get good weather like it was on this day.